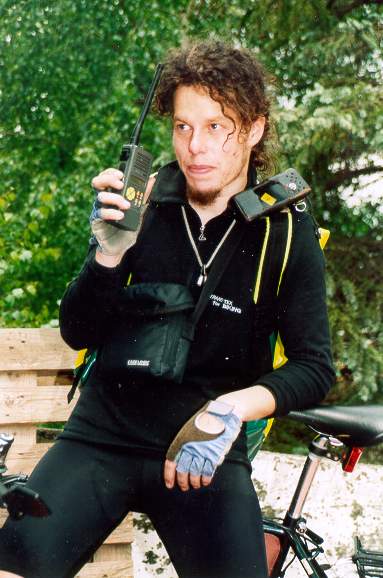 Why Arnie S.
loves CCS.
This is Arnie S. Although he has the same abbreviations A.S., he is not Arnold Schwarzenegger. But, like CCS, they are all from the same hometown GRAZ in AUSTRIA. Arnie is a terminator for the Velo-Blitz speed delivery service. He has to terminate his mission, just in time.

Now Arnie is happy, because he is in love with CCS. But that was not always so.

Arnie likes this job. On his bike, he heads to the customer faster than the other traffic of the city. He is paid for every service. The faster the delivery the higher the income. Time is Money.

Arnie receives his orders by radio communication (Kyodo-EP900). And once every day, Arnie got very angry, because he lost communication on an exhausted battery. He lost time and money and he had to use his energy to drive back to the headquarters, to replace the battery, to hope that it is better charged, and to go back where he came from, to continue his job. Battery charging was really the limiting bottleneck for his activities! But he resigned, because his workmates had the same troubles during their shift.

Then he heard about CCS - the Ultimate Charging Solution. And what he heard sounded like the ultimate solution to his problem. He talked to his boss, they tried CCS and - no lies: Now, the same batteries do not exhaust during one shift. It's hard to believe, but now the radio transceiver runs more than 4 shifts (>20 hrs) from a single CCS-charge. To achieve this incredible improvement, nothing but a change to CCS-charging technology was necessary.